seems to be bothering my sinuses 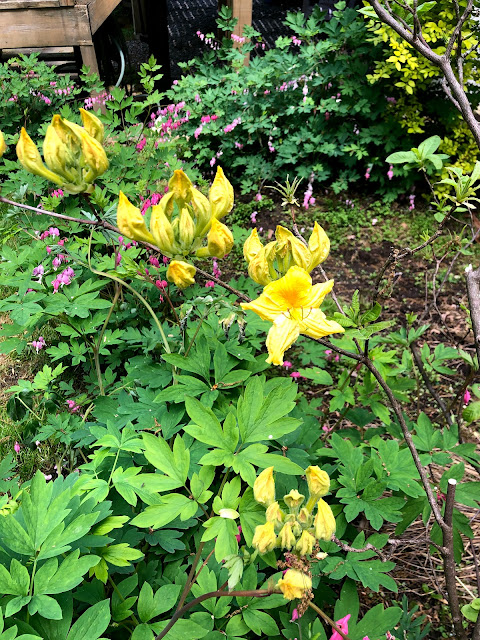 Don’t know what this is but it certainly is pretty. 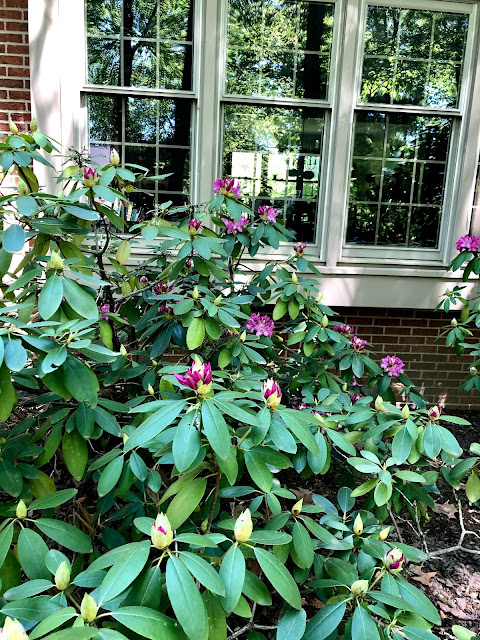 Rhododendron is starting to show their pretties. 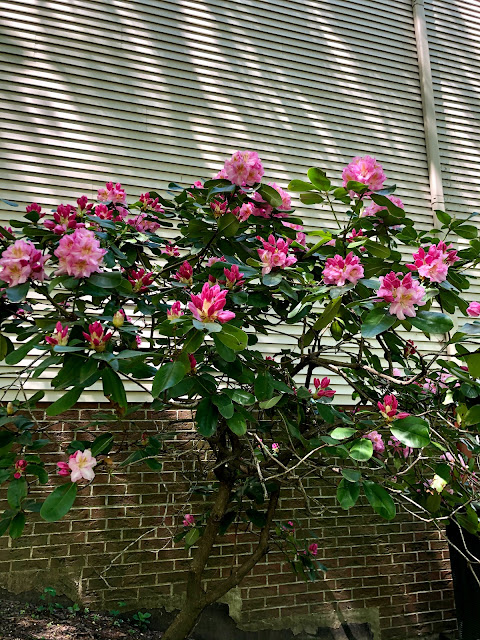 The kiddos wanted to show me

some of their skills on the Ninja course. 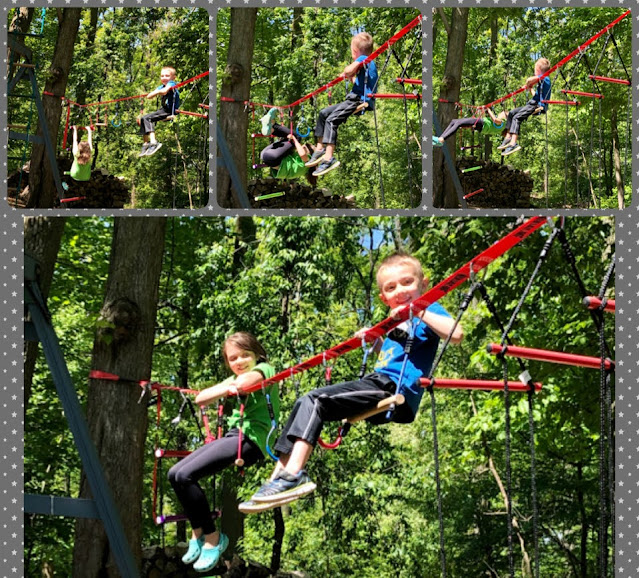 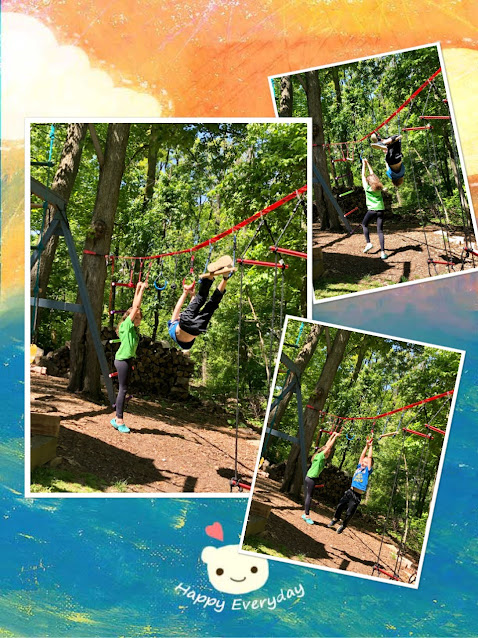 Young, strong, and far more agile than me!!!

On Tuesday the parents had an appointment

so the grandparents were in charge 😃

so of course the little guy had s'mores on his mind!

Didn't think we would make some but we changed our minds...

it seemed we didn't have enough grahams.

No worries, Nana suggested chocolate chip cookies as a sub.

That went over big with the boys! 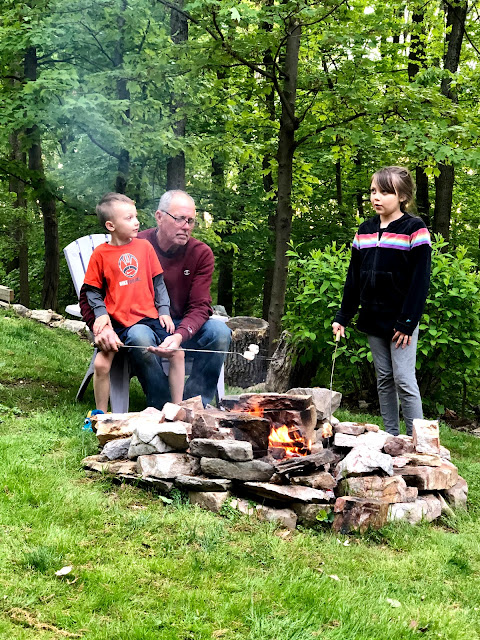 What you looking at, Zoe? 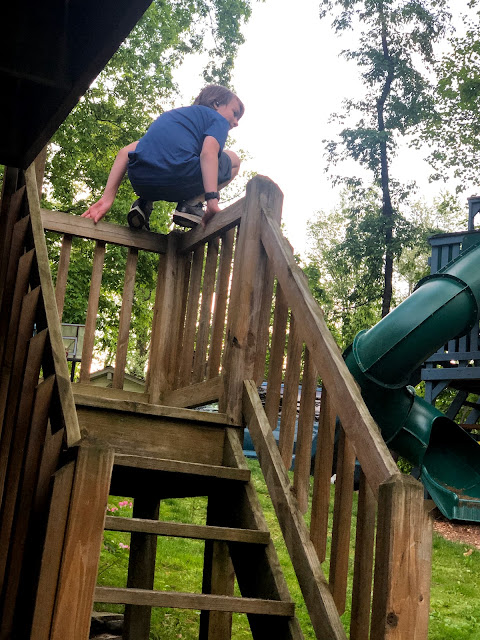 He's jumping from the stair railing!!
Of course the little guy wanted to try too...
but the grandparents put a stop to that idea.
We do make wise decisions, mostly.....
although..... 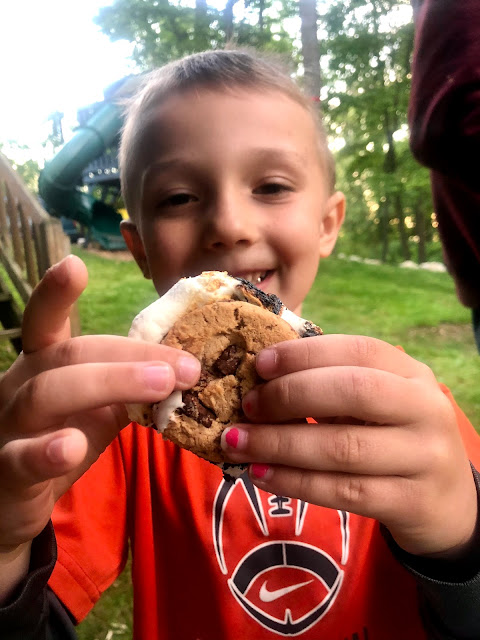 He loved this s'more
but was a bit too much of a good thing  for him.
He had a belly ache over night.
(Bad decision on our part!) 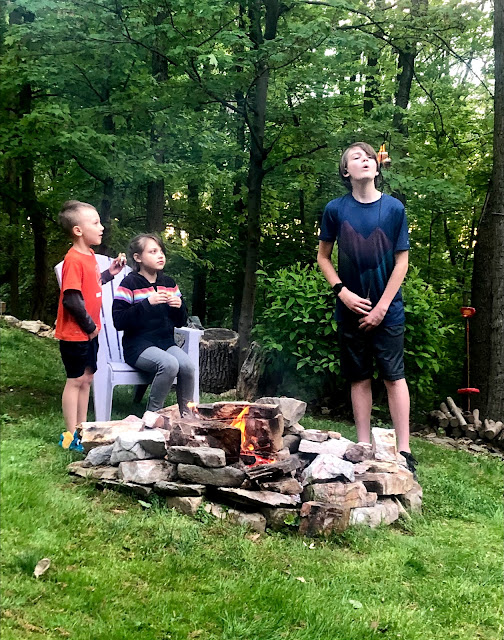 They love to burn their marshmallows!

It's been 7 years living here with them.

(6 with Noah, was born a year after we moved)

Plus we lived together in our former home for almost a year.

We still love living with them!

Gina and Justin gave me a generous gift card to Target for my birthday.

I've been looking for a pole to hang the bird feeder for the past year..

decided to see what Target had to offer.

I was thrilled to find this one! 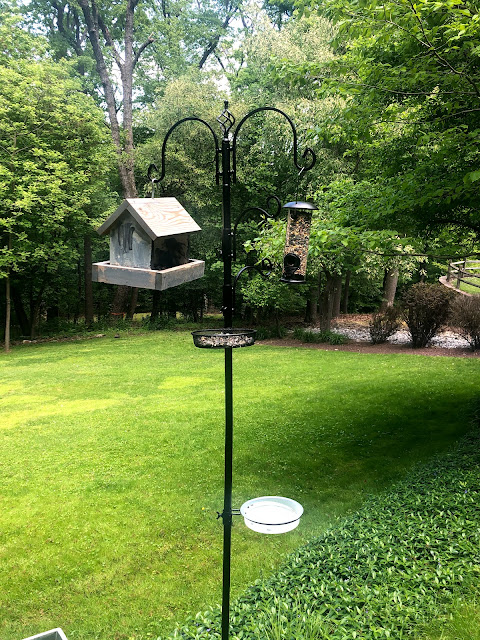 It holds several feeders!
A squirrel was a bit confused at first wondering where the feeder went.
THEN
found it and
tried to climb the pole but Dale scared it away.
To deter their efforts,
he greased the pole with cooking oil.
Next try was not successful.
We call that a win!
Wishing you fabulous spring days
and
a delightful weekend!
❤❤❤

I cannot imagine being as agile as your grands! It takes me a couple of tries to get out of a chair! Lol
Beautiful collages as usual. It is so pretty and green in your yard and the blooms out front are gorgeous.
I am so happy you all found this home and have enjoyed life together. I love the pole for your bird feeder and way to go keeping the squirrels off, have a blessed weekend, xoxo

Ramblings of a Retired Lady said...

Looks like a fun day with the kiddos. I sure like your bird feeder hanger - we have a similar one and do enjoy watching the birds empty it!

Ramblings of a Retired Lady said...

The weather may not be warm yet but the views are still beautiful. Happy Birthday to Kirby...he is so cute and a big part of the family I know. Hope your weekend is a good one.

Oh how I love the pretty blooms! My sinus issues seem to have been better perhaps because of the masks, I hope yours gets better. I know you enjoy watching all of the littles having fun. The kids playing outside brings back memories of my childhood, that's what we did. Enjoy your day dear Doris, HUGS!

It seems impossible that you're at that house seven years already! But a lot of life has happened in those seven years in both of our lives I guess!

We well remember when you shared a first look at your new home, Doris, a number of years ago. It's clear to see that it was the perfect choice for you and your family. Sorry to read about Noah's stomach upset, but those s'mores looked delicious.