It's been a good summer and I am not ready for it to end.

Ellen and I love Scoops,

a little sandwich and ice cream shop near us.

They also have a mini golf course.

for a game and some ice cream.

It was really hard to come up with a date that worked for all.

We never did find one that suited all of us, sadly.

Two of the girls and moms had other commitments

and had to miss it.

It was a hot Sunday afternoon but not totally sunny

which helped...plus the course is in the trees.

Still, we were melting till we were finished! 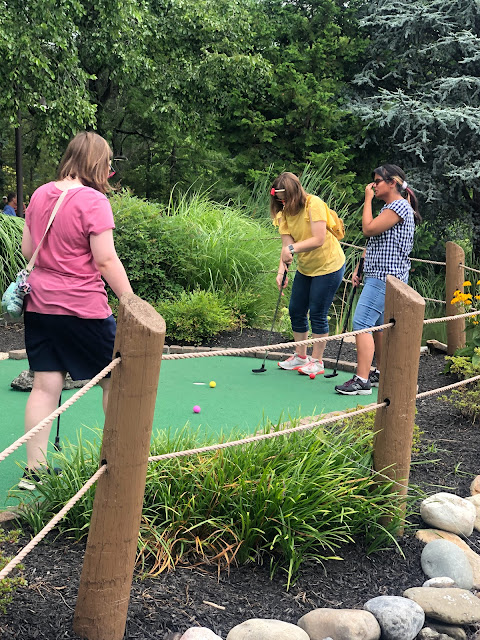 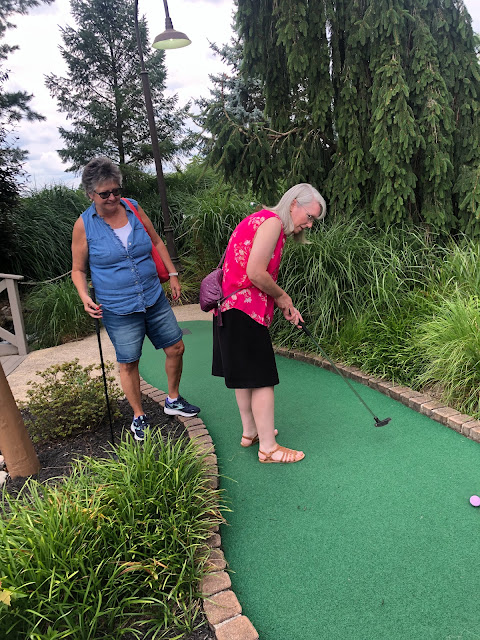 Maureen is aiming her ball toward the hole... 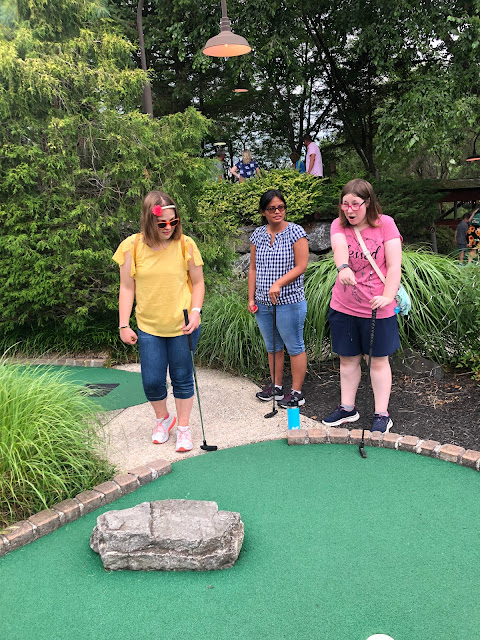 Emily is surprised at her mom's success 😄 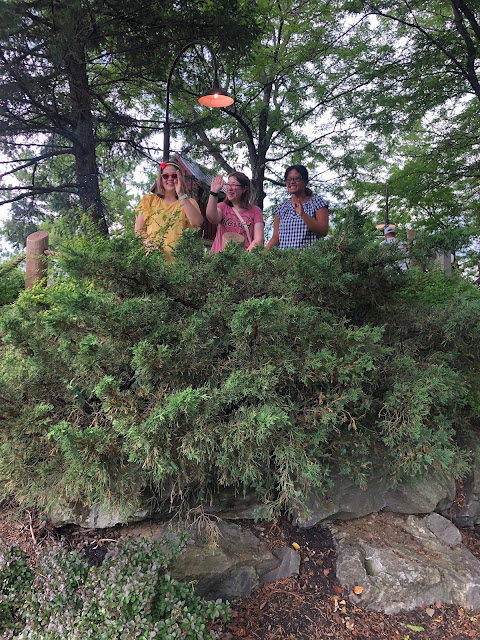 The girls moved along the course way faster than the moms....
we had lots of talking to do which took us longer, I guess!
(didn't keep score...decided we just wanted the fun!) 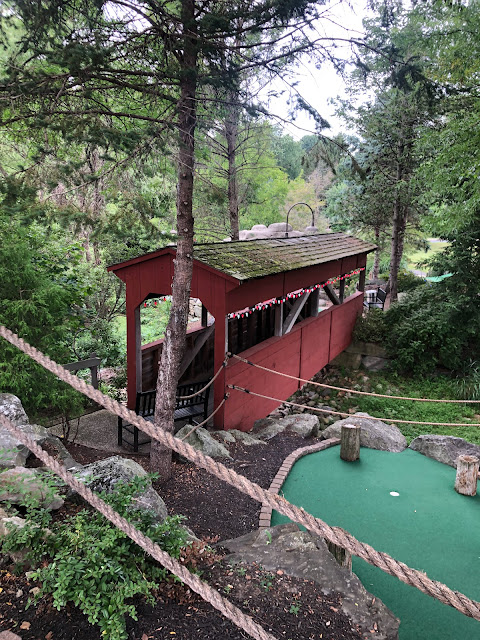 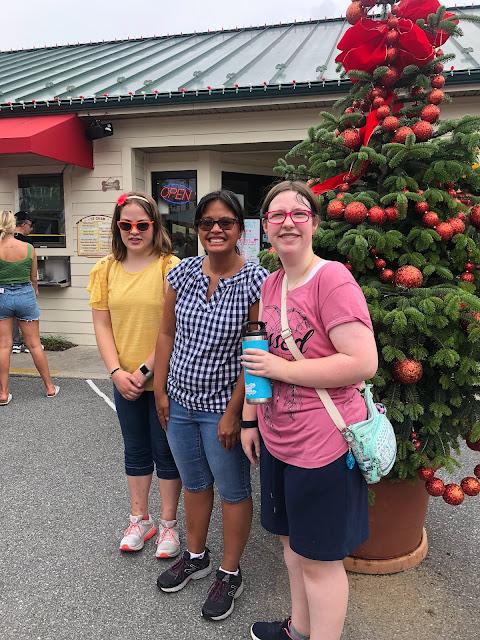 We were very ready for something cold!
Scoops always celebrates Christmas in July.
They aren't open in December, so why not? 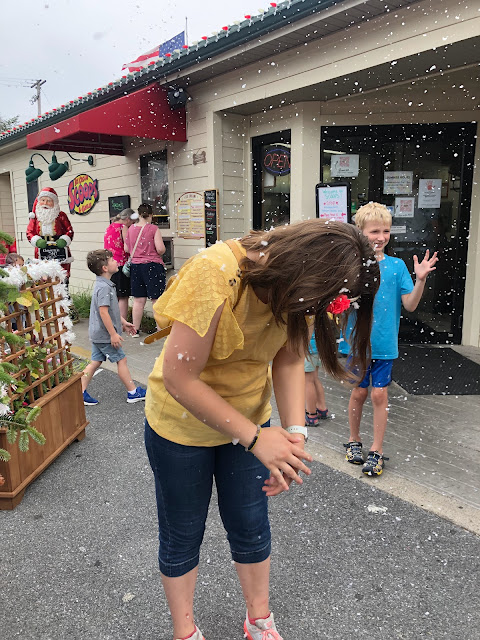 Ellen got caught in a snow storm!! 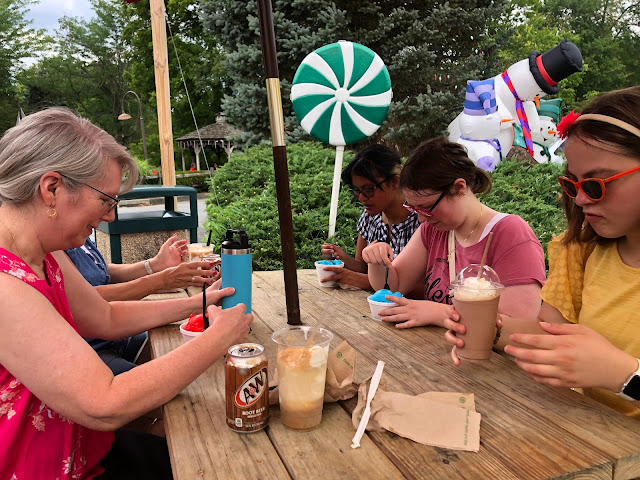 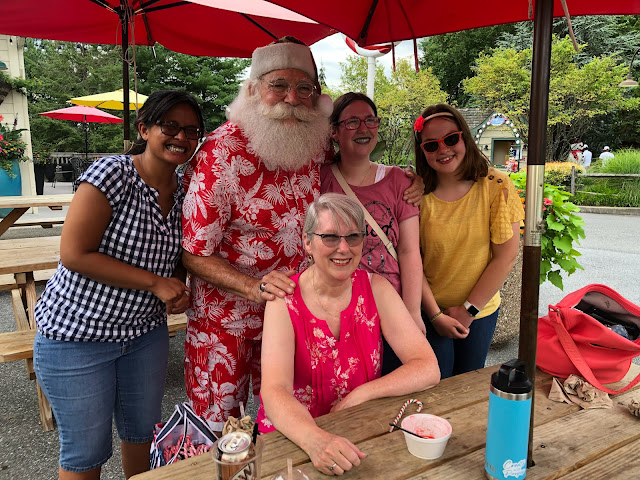 Look who came to wish us a Merry Christmas and give us candy canes!!
Such a fun afternoon!
Ellen has a Doctor in York County that she sees once every quarter.
In past years we would eat lunch at the Issac's
(another wonderful sandwich restaurant)
which is near there.
Since 2020 some of her appointments have been video
instead of in person.
On those days I'd order pickup at the Issac's near our home
because Ellen still wanted to do our special meal together.
Her in-person appointment last week was after lunch
so we decided go to the York location before the appointment
and eat on their covered porch.
Delightful! 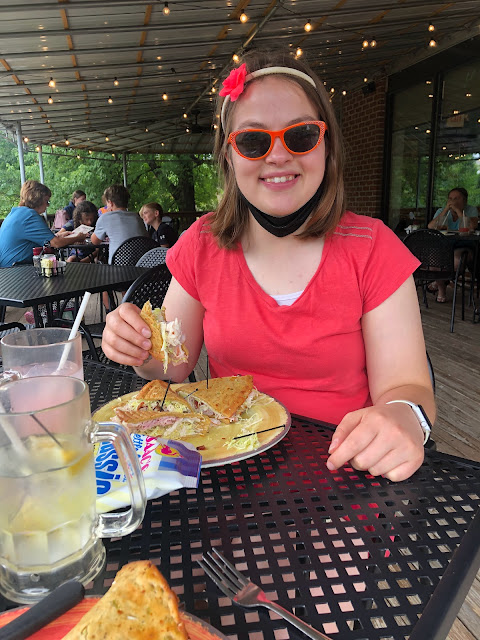 She has her usual except she now gets it on the GF bread.
I love that bread too...we both eat GF. 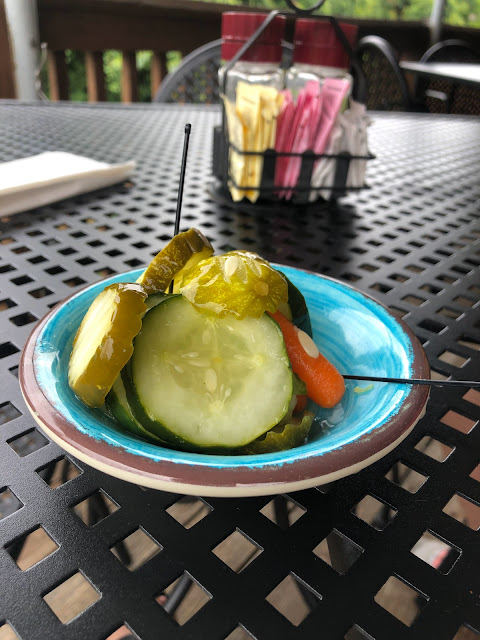 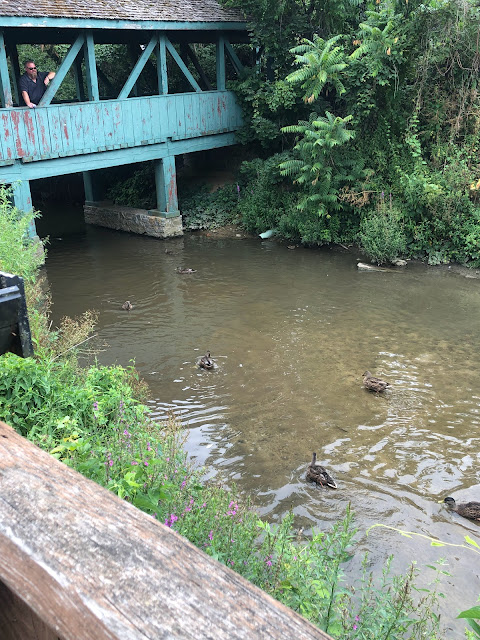 Cute little bridge where someone was feeding the ducks! 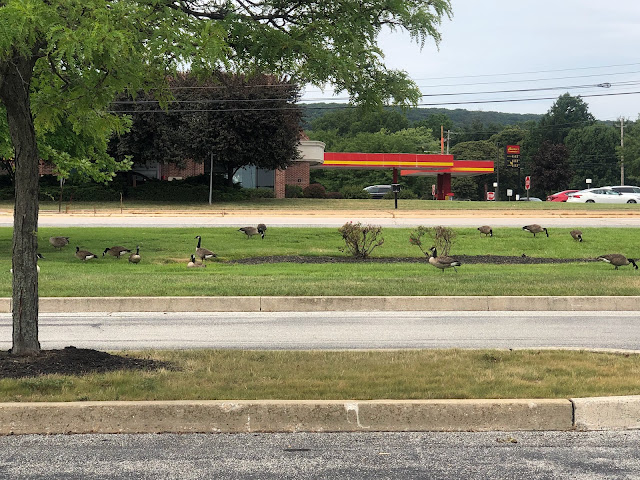 At least the geese were happily hanging out on the grass
and not slowly crossing the driveway or road
as they sometimes do!
What a nice lunch we had that day!
We don't go out to eat very often
and since the pandemic, which refuses to leave, so it seems,
we have not been eating out after church.
I recently found out that Oregon Dairy has outdoor seating and they are open on Sundays!
We had breakfast after church this past Sunday
on their delightful deck. 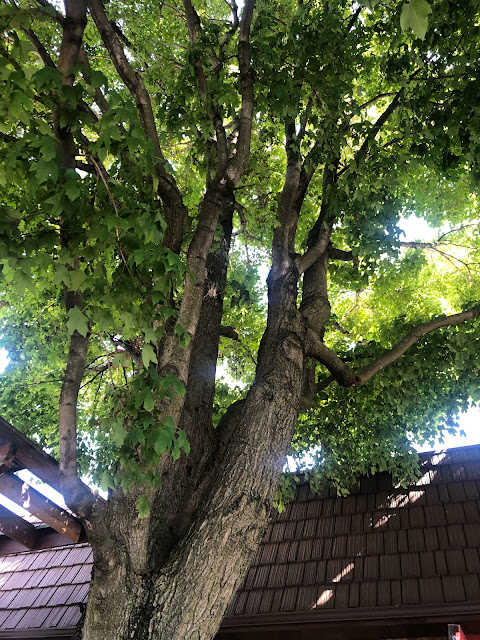 Our table was under this tree. 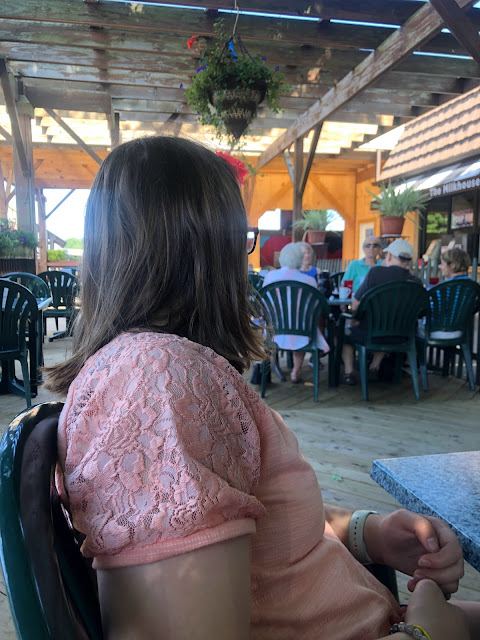 Waiting for our meals. 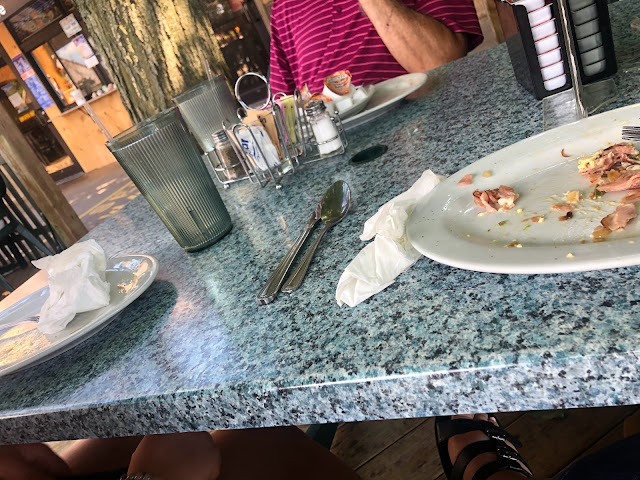 Looks like it was enjoyed!!
Was a nice change from going home and making it.
But I do wish they had more options for GF needs.
Even just offering bread for toast would be nice.
Don't remember what brought the idea to Noah's mind
but he really wanted to go to Dairy Queen.
I told him I would take him sometime before school starts.
Last Thursday he thought it would be a good day...
and it would have been except he mentioned it too late.
It was 5:00 by that time and too near dinnertime.
He was terribly disappointed!!
So we made brownies instead... 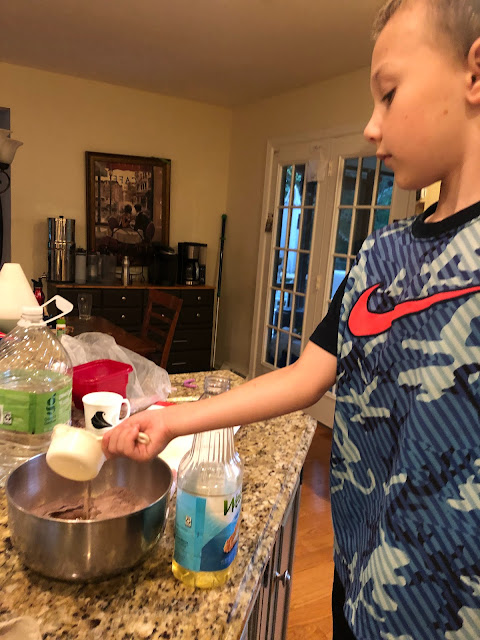 He carefully measured and poured the oil. 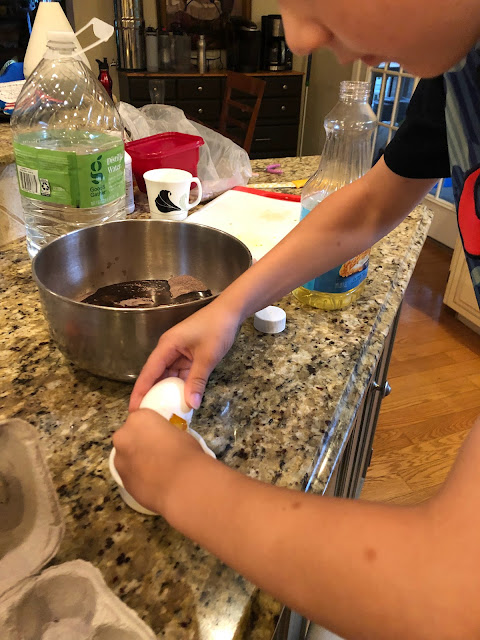 And cracked the eggs! 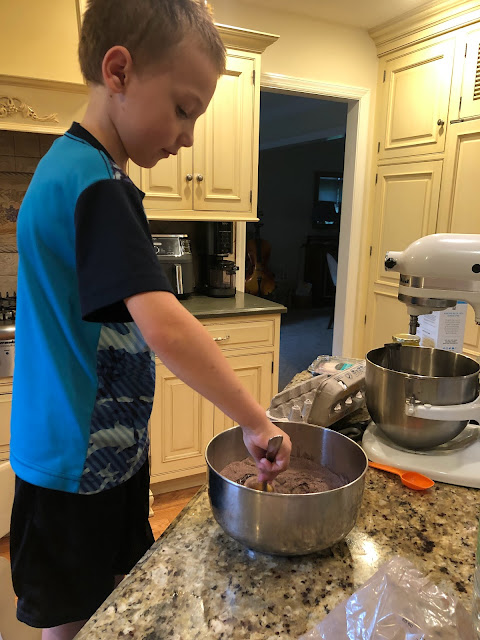 Stirring it till it got too hard.
He did a great job and the brownies were delicious.
He counted down the days
and  today was the day we went to Dairy Queen! 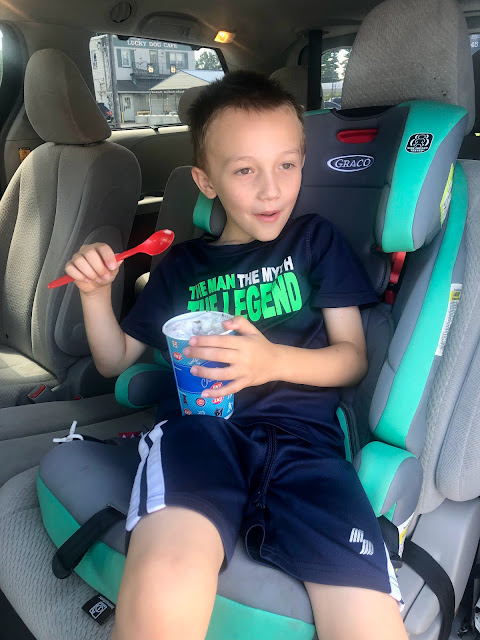 He wanted a medium Oreo Blizzard!
I got a small strawberry sundae. =) 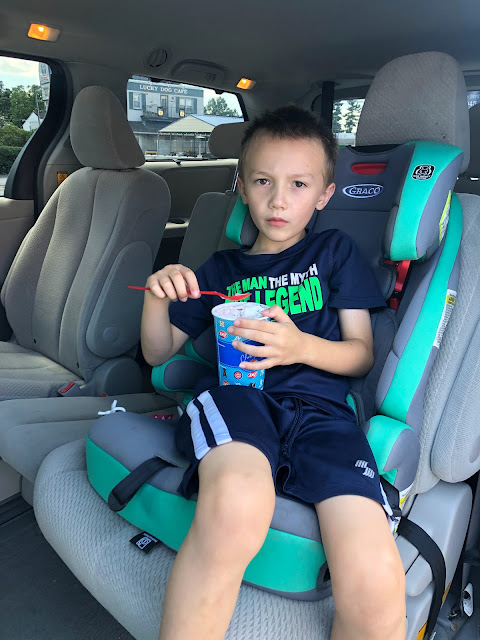 I wasn't sure he could finish it...
What you talking about, Nana??!! 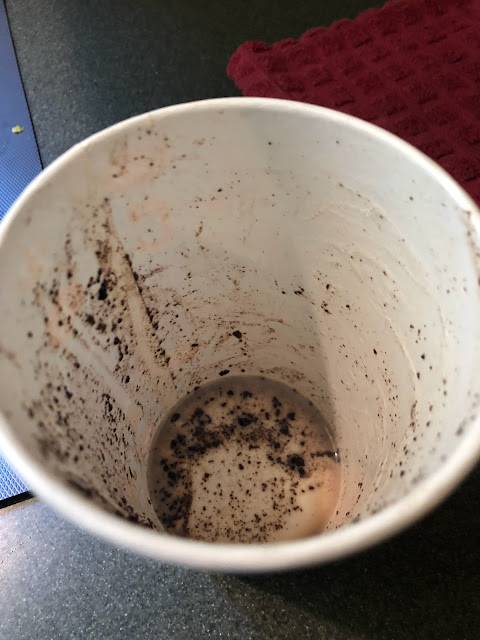 Lots of fun going on over there! I think it's great that Ellens group gets together for these activities, and the moms join.
Your lunch stop looks great too!
Hooray for Noah finally getting his Dairy Queen.

This has been such a wonderful summer! What can we do to make it stay longer????

What a wonderful time, love playing putt putt. My favorite picture is the girls up above the rocks in the trees:) YUM Dairy Queen, it was one of my Mama's favorite places to go. We would all get an ice cream and when it started to melt a bit, she would "clean it up" for us kids but licking away the melty part. Oh how I miss her and thankful that I still remember things like this. Enjoy the last days of Summer dear friend, I plan on doing the same. HUGS!